A few weeks ago, someone was remarking how much shoveling they have had to do, and asked if I was in a similar situation.

Earlier this week, I awoke before dawn and was so happy that the temperature was much warmer than had been forecasted. Then I noticed the small dash in front of the 14 on the display – 14 below instead of 14 above.

That same morning, the Ski King’s auto thermometer reported a low of 26 below air temperature as he drove through the Elkdale valley.

On top of Elk, a mere 5 below as the rest of the cold air had settled into the valleys.

Frost has canted the back door just enough to render it unusable.

Temperatures in the lower 20’s had me perspiring, shedding layers to stay comfortable.

Nearly two feet of snow in the back yard; at least another foot higher up.

Too Winter? Nope, this is just how I remember winters from “the good old days”. Nice to have them back. 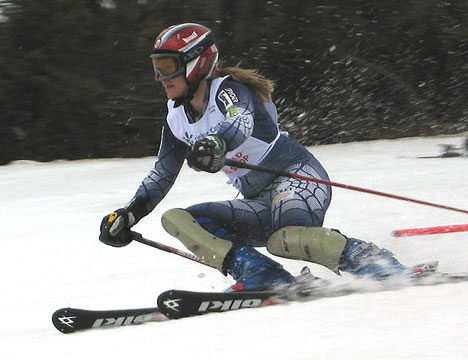 Come out and cheer on the best ski racers in Pennsylvania February 20, 21, 22! 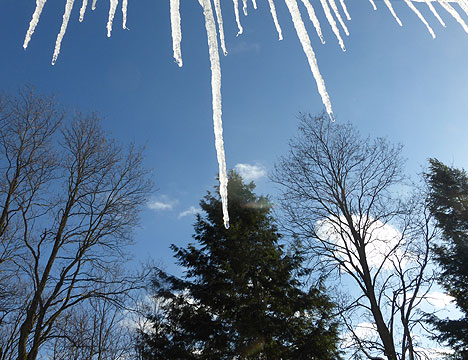 Plenty of snow on the ground; more  forecasted.

The weather station in the backyard reported a low of almost 11 degrees below zero this morning.

The thin, icy base of the snowpack is now buried under more than a foot of snow. One of the middle layers, comprised of several inches of such light, delightful snow, that the Ski King reported it to have provided one of the 5 best ski days at Elk ever; “Deeper snow on Monday, but lighter snow on Friday”.

Setting cross-country ski tracks in single digit weather through 12” plus snow, deepens the appetite. The usual nightly bowl of soup had to be replaced with some meat, a mound of mashed potatoes, and green beans. Even so, body fat keeps diminishing; episodes of nine and ten hours of sleep are barely adequate to keep soreness from settling into legs, arms, shoulders.

Hardly any time to fit in supper before the bed, trimmed in two thick comforters, beckons to it’s haven from the cold.

Faithful Labrador bounds through the snow like a seal through water. Earlier in the season, with less snow, her meanderings traced her interests as we proceeded on our adventures. Now, the snow so deep, she patiently follows me in the wake of my tracks rather than hazard the exertion of jogging through unbroken snow.

As we ascended a particularly steep pitch along a ridge corniced by the wind, she left my track and climbed the slope where the caprice of the wind had scoured almost all the snow down to near bare ground.

Our eyes met; hers curious as to why I continued on my straight and true strenuous course through deep drifts of wind deposited snow as she, only a few feet away, the snow barely to her dew claws, jogged easily up the hill.

We continued across the high meadow as swirls of snow, coaxed by a stiff 20mph+ wind, rose from the snowpack. On one end of the sky, far off bright orange betrayed the point at which the sun sank behind the distant horizon. The near skyline dominated by Elk as the night skiing lights became illuminated.

Upon awakening just before dawn, the view of Elk included the white of the moon, the snow, and the amber glow of the mountain lights reflected off of a solitary cloud.

Cold temperatures, near bottomless snowpack, no above freezing temperatures forecasted for the foreseeable future, plenty to eat, a warm dry bed for rest, and a faithful Labradorian companion with whom to enjoy all this; it may not be everyone’s vision of paradise, but it works pretty well for me.