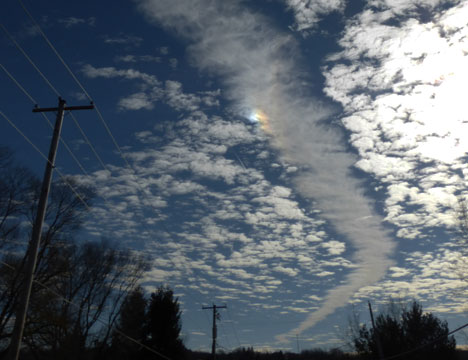 Not sure the source of the interesting configuration above – complete with a divine spark of the colors of the rainbow – a little sun dog. Maybe an airplane flew through disrupting the cloud bank, or maybe a river of wind, a current in the ocean of sky.

It’s nice to enjoy a sight that doesn’t happen every day. Gratitude for observing something so uncommon lessens the importance of determining it’s exact nature.

During this time of giving thanks, or expressing gratitude, it’s good to remember that some believe “Be careful what you wish for, lest it come true” is more than just a saying, it is truth; whatever is in mind now is most likely to occur in one’s future.

Others believe that, even more so than wishing, gratitude determines the course of our lives – what we are grateful for is most likely to present in one’s future.

One can be grateful for the roof over their head, or wish for a bigger roof over a bigger house. Some wish that family or friends were always agreeable. Some are grateful for having  folks, even if sometimes contrary, in their life at all.

Always a good idea, but during this holiday in particular, be careful what you wish for; be grateful for what you want more of. 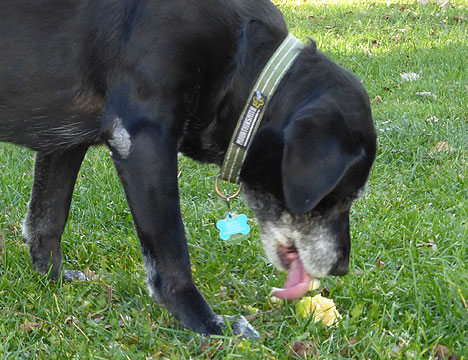 Probably the main reason I love living here is that it is such a sensuous place. Given the season’s abundance of tasty pears and apples right in her very own back yard, dog undoubtedly agrees.

Certainly our community experiences fear, disappointment, illness, and death, same as humans and animals anywhere. However, the soft curves of the hills in which we dwell, limitless starry nights, clean water, vegetables, fruits and berries, eatable right off the tree or vine, makes the description “paradise” to be not much of an exaggeration.

Situated at such a latitude and elevation, near extremes of what this planet offers weather-wise, from blizzards to hurricanes, visit here. Over the past half-century, I’ve stood on the same hill and felt temperatures from over 100 to below minus 20 degrees.

Tropical islands show much less variation. In December, the average temperature may be 86, in July 88. In deserts, the monotony of monochromatic, arid weather is punctuated by blossoms of powerful colors, though the interval between the rainfalls that provoke their appearance may be years, decades, or centuries.

I imagine people living near the equator tune to the narrow contrasts there, and experience the subtleties of that climate every bit as distinctly and pleasurably as do I those here on the hill. Wherever anyone is on this planet, day darkens to night and night yields to dawn. Yet even this common occurrence, dependent on where you are, ranges in length from hours to months.

There can come a beneficial insight from the process of imagining what it would feel like to live in a different body, or in a faraway place, or to appreciate current circumstances from the perspective of longer than one human lifetime. 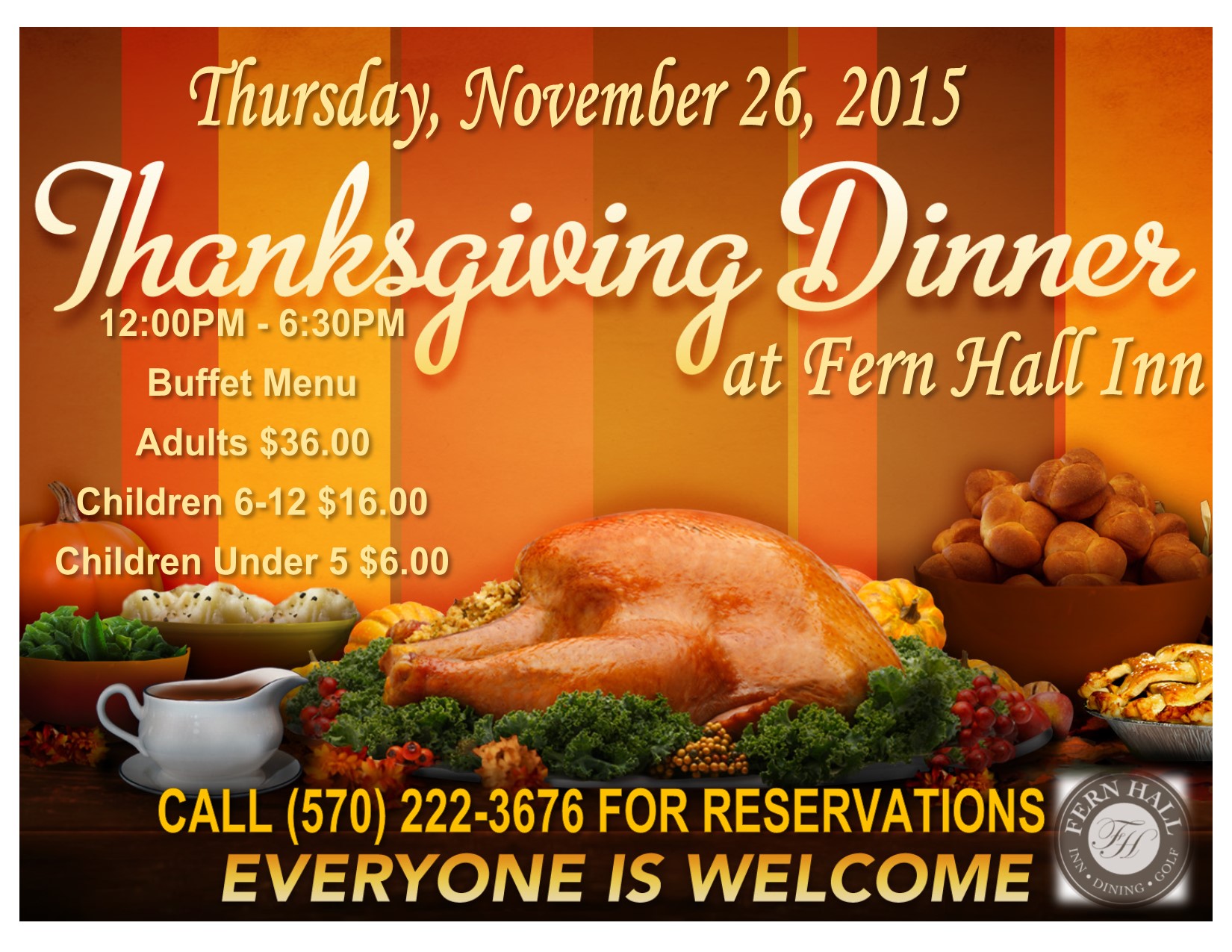 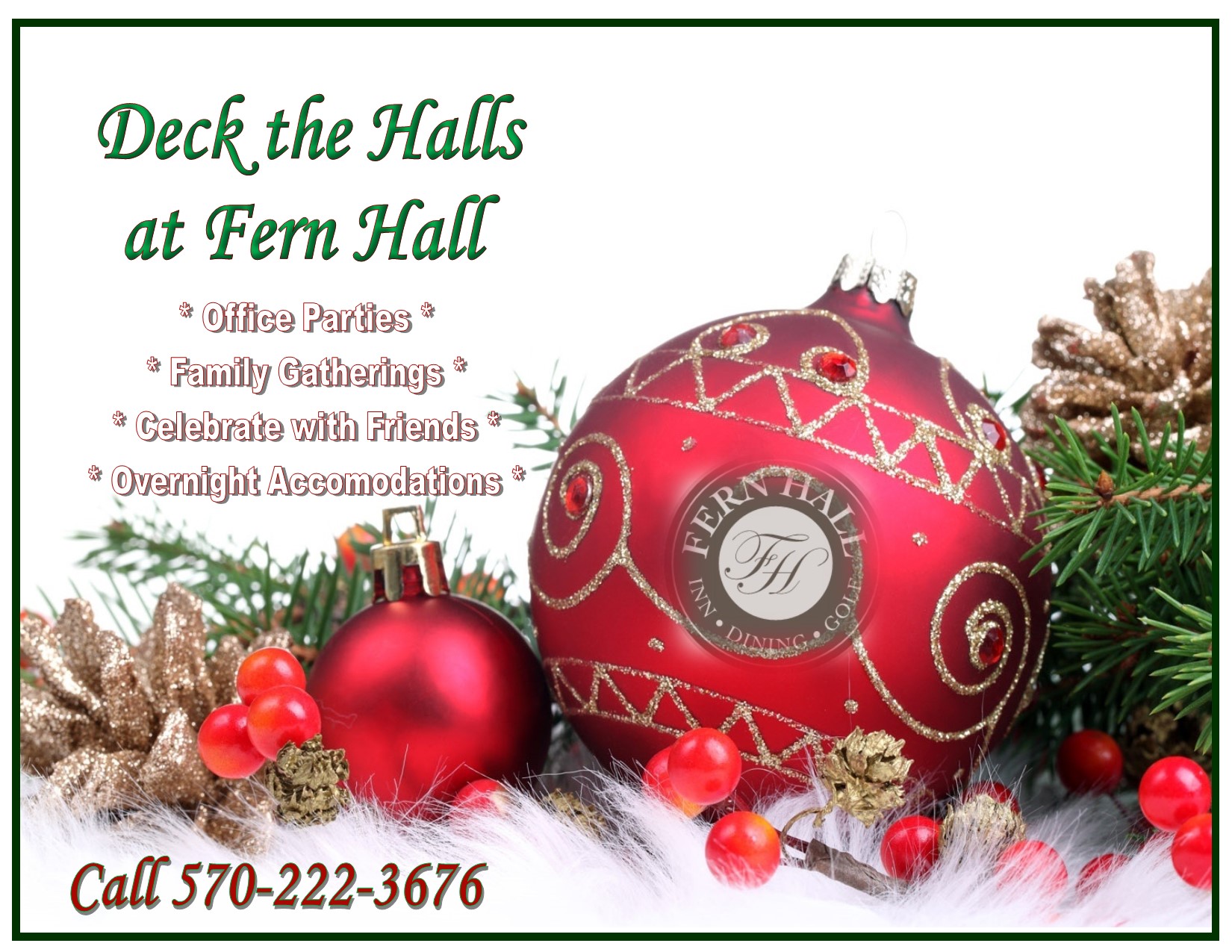 THE ‘TALKING’ CANOE
CLIFFORD TOWNSHIP PA — Since the initial discovery of the Mud Pond Dugout Canoe in 1976 and its eventual acquisition nearly three decades later by the Clifford Township Historical Society (CTHS), this particular canoe has led to some welcomed recognition for the township and its small group of resident-historians. Most significantly, the canoe itself has been primarily responsible for the development of the Museum of Local History in Clifford, which, in effect, has helped put the 41-sq.-mile rural township of nearly 2,500 residents more prominently on the map.

Add to this the fact that the canoe now talks, well, that is certainly a map maker!

With thanks to collective grants from the Bradford County Regional Arts Council, PA Partners in the Arts, Lackawanna Heritage Valley, and support from Adams Cable, funds were recently provided to essentially give a voice to the historic canoe display. “The overall display has developed into something not only very beautiful, but it’s informative and educational,” said Sandy Wilmot, CTHS President. “It authentically tells the story of the Native Americans who once lived in our area, what their lives were like, and how their being here helped lead to the development of Clifford Township.”
As Wilmot explained, “To create the effect we wanted to complete the canoe display, we needed more than signs that visitors could read. We wanted the canoe and the overall display to literally come alive. We obviously have the visual … we needed audio. The display needed sound, music, and an actual vocal presentation of what’s in the display itself. We joked that the canoe needed to ‘talk.’ Unfortunately, none of our small group has the capability to create something like this from our ideas alone.”
At her son’s suggestion, Wilmot reached out to Magdon Music in Olyphant. “These folks were wonderful!” Wilmot exclaimed. “In barely three hours, Joe Loftus and his brother, Bob, literally gave a voice to our canoe display.”

“Sandy came to us with all of her ideas. But, admittedly, creating exactly what she wanted was a bit new to us,” said Loftus, a professional musician and owner of JL Studios, located on the lower level of Magdon’s shop. “It was a trial and error learning curve for us that required a bit of research. We have the equipment, but making things work exactly to fit Sandy’s ideas required pushing the right buttons. It’s an art form, much like putting a puzzle together. Once everyone’s input was there, it all came together fairly easily.

“Sandy wanted to include Nature’s background sounds with chirping birds, a crackling fire, swooshing water, and flute music was an absolute must for her,” Loftus said with a laugh. “Added to these, she needed clear vocals to include the descriptive information. That’s where my brother came in with the voice-over. He’s a former DJ who added to a great team effort. We developed the audio tracks, edited things as Sandy listened, offering her give and take, and she left here very happy with the end results.”

As Wilmot added, “Frank Little Bear is a Native American and a friend of CTHS who has often helped us with our historical presentations. He’s also part of this audio tape, as he literally takes visitors on a journey through the display. He talks about the canoe, how it was made and used. He also talks about the clay used in local pottery, the Lenni-Lenape who gathered wood and stones for their villages, the animals who were considered sacred.

“It was absolutely amazing to me when we were all done,” Wilmot said. “We left Joe’s studio with a great sound tape, and Mike Magdon ordered and installed the equipment necessary to synchronize everything, including some special lighting effects. These fellas literally created our ‘talking canoe.’ Now visitors can push a button and listen to 20 minutes of local history that’s presented much like museums in large cities. Everyone in our society holds themselves to a set of standards for excellence in everything that we do. This tape is a very professional addition to the museum, something which Clifford can be proud to have in its town.”

When the canoe was first displayed during the 2008 Chautauqua, it held mild interest. It was an exciting find for the society itself, as well as the township’s supervisors who have helped support and sustain the CTHS and its ongoing works to develop the museum and its ever-growing collections, events, and activities that bring visitors to Clifford. But at the time, despite the especially handsome find that it is, the canoe merely sat in a room devoid of much else. When early visitors stopped by, local historians and docents talked about its surprising discovery and the history of the Native Americans that once lived in the area. To further tell its story, a beautiful mural was painted in 2011 by local artist Michelle McLain, depicting scenery that authentically reflects the canoe’s 1692 lineage. Today, the canoe now has a voice to further share its own story and the related history of Clifford and its surrounding area.

Through years of fundraising and grants whose well-written verbiage has been thoroughly researched, the society has continually added to its museum, which is located in the Community Center on Cemetery Street in Clifford. The museum (open monthly on the third Sunday from 1:00pm-4:00pm) includes memorabilia, historical artifacts, art works, and more that are all part of Clifford and its people. Additionally, the CTHS continually benefits from dedicated volunteers and citizens who share their time, many and various talents and skills, as well as their own ancestral memorabilia to help further its works and the community. “And to think … it all started with a dugout canoe that has been the key to helping open the doors to sharing Clifford’s history with others,” said Wilmot.
The CTHS was born during the planning of the township’s bi-centennial celebration in 2006. But as the CTHS has grown and earned non-profit status, the little society that does big things keeps getting bigger. For additional information about the CTHS or to share and participate in their various activities, contact them at 570-679-2723, via swilmot@echoes.net, or at www.cliffordtownshiphistoricalsociety.org.

#2 The Mud Pond Dugout Canoe display in the Museum of Local History in Clifford is now complete with an audio tape that presents some of the local history of Clifford and the region. 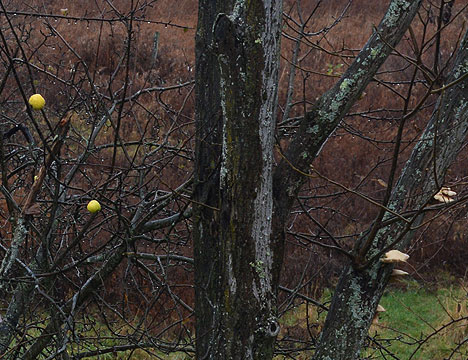 After weeks of hills bursting in vibrant autumnal colors under gentle skys, and specatacular star laden nights, it is raw November.

It’s butternut neighbor, nourishing fewer and fewer branches the past few years, succumbs to feeding fungus; a harbinger that, as some of their companions already have, limbs will wither until wind or heavy snow dashes them to the ground.

Be this our only image of the year, one’s mood could jeopardize. Mindfullness of all seasons evidences that fungus, branches and apples process to soil, flowers, and trees. 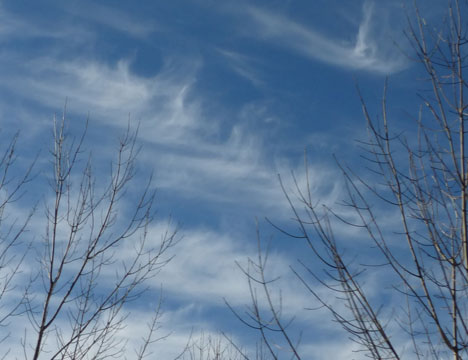