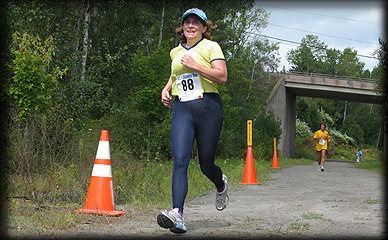 Answer: This local librarian is promoting the Montrose Blueberry Festival while appearing on the television quiz show, “Jeopardy.”
Question: Who is Hilary Caws-Elwitt?

The Susquehanna County Systems Librarian’s quest to be a contestant on the hit game show has been a long one! She first tested for the show in the early 1990s.

Hilary’s appearance on “Jeopardy!” aired locally on WBRE-TV on April 22, 2010. A watching party was held at the Montrose Are High School, about 40 people attended, and donations brought in over $400 for the Library and Historical Society. Congratulations to Hilary!!! 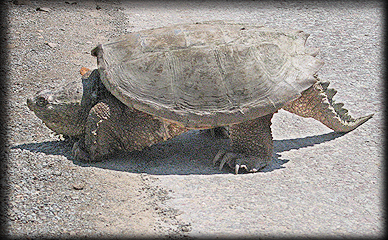 While traveling toward Elkdale recently, the handsome fellow above was spotted lumbering across the road.

Somewhat shy, he turned away from the camera several times.

According to Wikpedia, the “serpentina” portion of their name refers to their neck and head, and means “serpent” or “snake like”.

These turtles should be enjoyed from a safe distance. They can turn their head in a flash, and their jaws are powerful enough to amputate a finger.