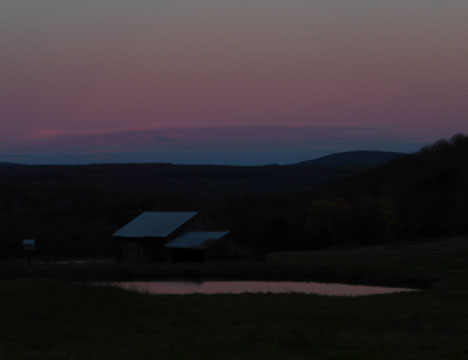 A few years ago, a friend of mine, 44 years old at the time, told me that he had just returned from a meeting with a team of medical specialists in Philadelphia, where he had received definitive diagnosis of his health condition that had eluded the regional medical community for many months.

His diagnosis was not good. Left untreated, the tumor in his chest would exact a fairly swift, painful death. Treat the growth with radiation only, and expect to die within the next 21 months. Have the lung upon which the cancer was feeding removed, and maybe live up to 150 months.

“The worst news of my life.” he told me.

He had two young sons that he adored. In 2 years, they would be barely in their teens. In 12 years they would just be of the age to marry, and begin a family of their own.

He recounted sitting quietly alone in his SUV in the cold, echoey, parking garage of the doctor’s office, ruminating over the news he had just received.

It was contrary to his nature to avoid a challenge. Before leaving the meeting, he had already decided to undergo the surgery, and subsequent radiation treatments if necessary.

Collecting himself, he figured the next right thing to do is to get home, make some phone calls, and schedule appointments and housing in Philly for his prescribed surgery and extended battery of treatments.

The decision made, and now anxious to execute his plan, he turned the key in the ignition, and rushed the big SUV toward the exit, squealing tires echoing against the cold, gray, concrete walls of the garage.

Just as he reached the exit, a sun-glass clad fellow in a business suit, walking on the sunny sidewalk outside of the garage exit, stepped into the path of the SUV so quickly that my friend almost hit him – stopping so close that only the chest and shoulders of the pedestrian remained visible above the black hood of the vehicle.

The fellow in the suit continued his leisurely amble in front of the car, refusing to acknowledge the near collision, or make eye contact with my friend.

Never known for his patience, my friend lowered the passenger side window so he could directly vent some well deserved rage at this apparent idiot who walked in front of his car, almost got hit, nearly adding injuring or killing a person to the day upon which he received “The worst news of my life.”

As the window lowered to it’s fullest extent, my friend could hear a gentle “click, click, click” from the sidewalk. He then noticed that the sounds corresponded to a subtle movement of the man’s shoulder. An instant later, the white red-tipped cane became visible as the man progressed past the SUV. My friend remained silent as he pressed the button to raise the window.

As my friend watched the man continue on his way down the sidewalk,  he thought to himself “I’m not having such a bad day after all”.

Kevin shared these thoughts with me years ago, and said “There, there is your next Wanderlist story”.

Optimistic about his situation, I thought that we would share at least a few more years of friendship. I’d flesh out the notes I took, and finish the story “someday”.  As is human nature, I never really knew when “someday” would be; apparently, “today” is “someday”.

I believe that Kevin’s story is an example of compassion. Every day, we are all challenged or suffering in one way or another. Sometimes our afflictions are obvious to ourselves and others, sometimes not.

Being occupied with one’s own difficulties, real or imagined, can callous us to the suffering of others, thus worsening our collective situation.

On the day he received “The worst news of my life”,  it would have been understandable, though no less tragic, had Kevin been so distracted with his own difficulties that he pressed the brake an instant later,  injuring or killing someone else.

Strength of character, grace, and mindfulness allowed Kevin to rise above his understandably negative emotions,  be present in the moment, and bring to mind compassion for others, thus not making worse an already difficult day.

Thank you, Kevin for sharing about the day you received “The worst news of my life”. I hope my words reflect your thoughts.

Rest well. Peace be the journey, my friend.

Elk Over Round Bales