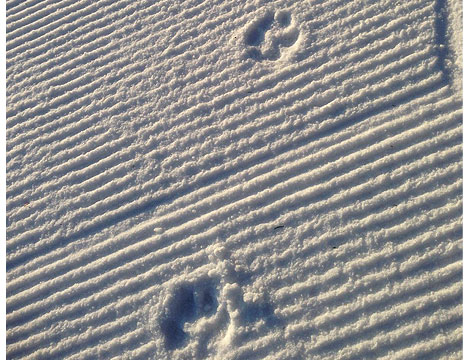 While riding up the chairlift first thing in the morning to help open the mountain for the day, there, far below in the corduroy textured snow left by the grooming tractors was what looked to be large canid paw prints. Left by one of the neighbors’ dogs that live nearby I thought. I radioed my crew member who was opening the east side of the mountain, and asked that they photograph the prints.

Arriving at the bottom of the west side of the mountain a few minutes later, I saw tracks in the snow apparently made by the same animal. Later, another patroller who has spent much time in the woods hunting as well as skiing, remarked that he had seen a large buff colored animal with a bushy tail, too large to be a cat, running across the trail below him.

“A Coydog” he replied when asked what he thought he had seen. These animals are not common as they are the result of the mating of a coyote and dog. Some even doubt that they even exist in significant numbers in this area. Coyotes in these parts of the country are larger than their western cousins, as some members of the packs mated with wolves as they migrated eastward.

It’s not uncommon to hear the unmistakable yips and howls as packs range the valleys hunting rabbits and other small game, however, seeing these animals, part dog, part wolf, part coyote, or recent evidence of them, is quite rare. 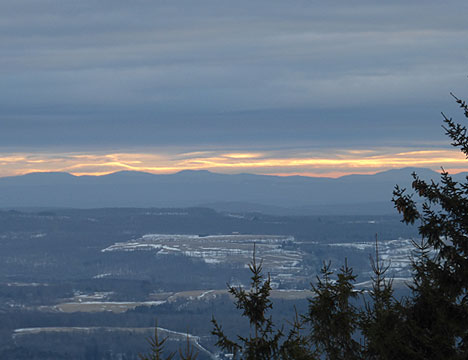 Since sometime in February, the snowpack had been constant, locked in place. Rained upon, then frozen by temperatures in the teens; unchanged by either thaws or considerable new snow.

A couple of weeks ago, a brief warm-up caused the snowpack to diminish quickly, but gracefully. The timing such that one more cross-country ski outing was thwarted as the window of opportunity for a good surface, between rock hard ice and melted mush, was less than a couple of hours.

Unseasonably cold weather continues to dominate, and attentions returned to proper layering of clothing to accommodate single digit mornings that yield to afternoons, sometimes above freezing.

The cold of mornings is now somewhat diminished by March’s rising adolescent sun – enthusiastic, but not yet fully mature enough to cast strong warmth. Continued preoccupation with Winter cold distracted our attention from seeking signs of Spring, and none made themselves prominent. Someone did note that they recently saw a robin, though “…it was wearing a little scarf around it’s little neck”.

Changing the clocks for daylight savings time seemed routine, not cause for enthusiasm as a sign of Winter’s end. Though twilight now comes later, its’ most evident effect was that of causing us to return to waking in darkness, a relapse to typical Winter mornings. A single report of snow geese, nearly invisible on the distant horizon was the only reminder that Winter may indeed, someday, end.

Yesterday’s arrival of astronomical Spring provoked a cursory inventory of the yard. Muddy tire ruts, formed during a brief thaw, remain frozen solid in the driveway. Not a single Snowdrop to be found, not even a blade of new green protruding from the earth, now mostly devoid of snow.

No mournful honking of Canadian geese from out of the dusk, no visible V of them flying overhead. Usually by this time of year, a few raptors have begun their northern migration along the highest ridges, Elk Mountain being one of them. Though the snowpack is essentially gone, Winter continues to own any standing water, keeping it under many inches of ice, inaccessible to journeying birds in search of resting places on their way back to their Summer homes.

Flurries continue to float through the air. Yesterday’s Equinox sent dark clouds at one elevation to obscure happy cumulus clouds higher up. From the top of Elk, one could see that folks in one direction were enjoying sun, rain in another, snow in yet another. The clouds, scurrying this way and that, divided their attention several times; most of us saw both Spring and Winter exchange prominence several times.

And then, as Elk became one of those places enjoying sun for a few moments, high in the sky with a flapping pattern, size, and coloration distinguishing itself from the crows, common on the mountain, was a Rough Legged Hawk; unmistakable with white wings tipped with dark bands. That being and his fellows summer in the Arctic. As they rarely encounter humans so far North, they seem more curious of humans than concerned. Given the altitude that fellow maintained, one could tell his intent was on his journey, not in resting or exchanging pleasantries.

After a cold dark start to the first day of Spring, The Ski King remarked “Sunny day now!” and doffed his hat revealing his shock of silver hair, usually a reliable sign of Spring. As the day wore on, turned dark, back to Winter, he defiantly remained hat-less as the cold wind mixed white flakes into his thick mane.

With excellent mid-Winter conditions, and feet of snow still on the slopes, Elk Mountain has set no closing date yet. Just in case one more storm leaves enough snow in the woods, the cross-country skis remain in place near the back door.

Even for those of us who secretly wish that every Winter was endless, whether we admit it outwardly or not, these harbingers of Spring, are welcome. We are weathered. Skin on fingers is scarred, split from the cold, wounds taped shut. Winter winds have etched crows feet one season deeper into our faces. Body fat is nearly gone having been spent armoring against cold for so long. Though expanded to their fullest size from countless turns on steep slopes and meandering trails, muscles are ready for a respite.

It’s time. The days will continue to lengthen from here on out, till all of a sudden, we find ourselves on a warm Summer day, in t-shirts and flip-flops, vaguely considering, anticipating, how next Winter will be. 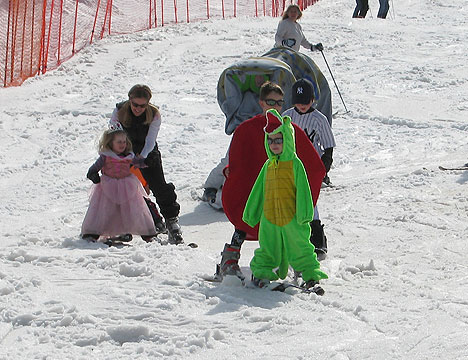 Check out Elkskier.com for times and details for the following events – there’s something for everyone!!! 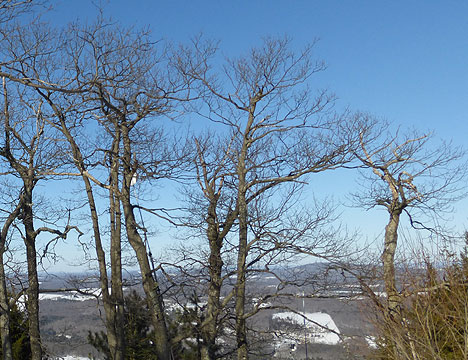 Elk Mountain is just under 3,000 feet tall: a combination of elevation and latitude whereby the trees on the summit are just starting to show characteristics of dwarfism. The crowns of the deciduous trees that grow there are more compact than their counterparts in the valley; their limbs are shorter, thicker and more gnarled.

There is no higher terrain between Elk and the Atlantic Ocean; it is the first thing with which weather systems collide. Winds, sometimes traveling for hundreds of miles, accelerate as they are disrupted by, and forced to overcome Elk’s steep slopes.

These winds, often bringing with them snow and ice, pummel the vegetation on the summit, exposing it to climactic conditions usually associated with regions much further to the north.

Tree line, or the elevation at which trees can no longer sustain themselves due to harsh weather, is at about 4,000 feet in the mountains of New England. There, on the highest mountains, one can hike upward through several climate zones, from the valley floor through deciduous, then boreal forests to rocky alpine peaks, essentially devoid of vegetation.

These same conditions that cause trees to keep themselves resolved against the weather, etch lines into the faces of those of us who spend a lot of time on The Hill. The youngest of us display these lines only when frowning and laughing. Temperate Spring sun will gently ease, erase these lines. By Summer, they will be all but noticeable.

For the rest of us, as season after season has accumulated, these gentle lines have etched themselves permanently into our faces; evidence of our extended presence in weather, both gentle and harsh, at elevation.