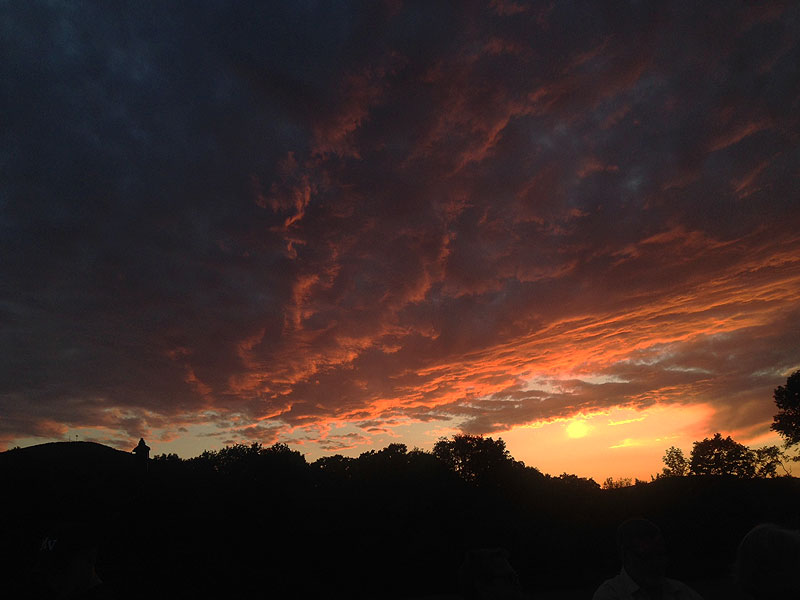 Crimson Tears played last night on the Stone Bridge Patio – world class musicians that have been prominent in the neighborhood in one lineup or another for decades.

These guys are no typical cover band – they take liberties with classic rock favorites, and sound like the original band playing creative variations of their work.

It’s easy to get so caught up with their musicianship one could ignore their surroundings….

And then, a glance over the shoulder reveals a particularly dramatic sunset.

The night stayed warm and comfortable till well after sunset. Agreeable conversation with friends and family, laughter and stories from ski seasons past mingled with soft chords and clear vocals into one melody floating through the East Branch Valley.

Temperatures will nudge 90 for the next couple of days under cloudless skies. Makes one want to cherish and taste the beauty of each and every day, knowing that each sunset comes a little earlier, brings us one day closer to skiing…. 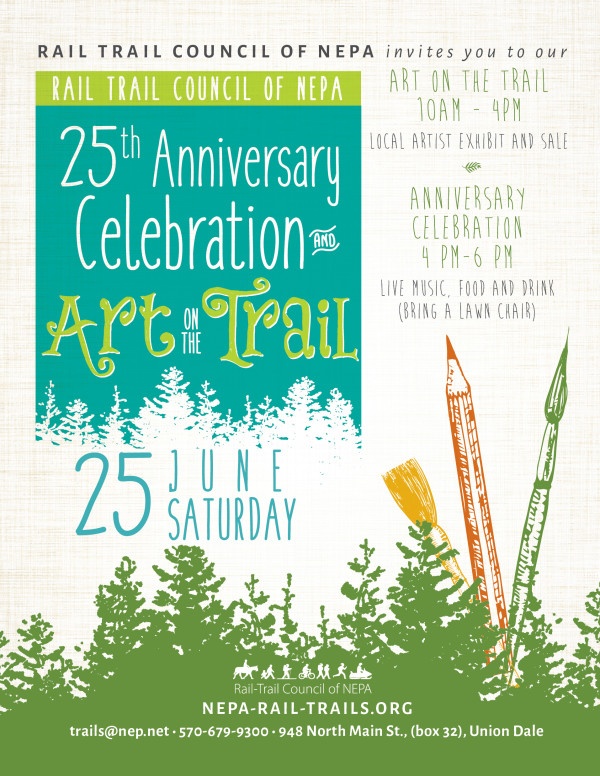 Art on the Trail/25th Anniversary Celebration

Join the celebration! The Rail-Trail Council of NEPA will be celebrating its 25th anniversary with a day full of activities including “Art on the Trail” on June 25. The day starts with a celebration of local art and crafts, from 10am – 4pm. Visitors will have the opportunity to admire and purchase the work of locals artists, which will be showcased in three historic buildings, Cable’s Store, Robert Stark’s Susquehanna Studio and Mill, and the Masonic Lodge.

In addition to the art/craft exhibits, special trail events taking place include:

There will also be a raffle with a chance to win a beautiful handmade quilt donated by Rail-Trail Council Member Linda Leber as well as many other beautiful items made and donated by the artists. Tickets are $1 and the winner will be drawn at 5pm the day of the celebration.

Activities take place close to the Union Dale Trailhead. All are free and open to children and playful adults!

Memories From The Trail

“Sure, of course we’ll be there – looking forward to it!”, I lied, and hung up the phone.

Nancy Ross had called and asked that my wife and I, who at the time were avid mountain bikers, meet with other riders and outdoorsy types from the community to help pick up trash on one of the abandoned railroad beds that ran through the neighborhood. Our job would be to consolidate the debris in a central location. Nancy had made arrangements with someone who had a big truck who would haul the stuff away.

The crew that we regularly rode with used the railbeds to quickly access trails that were some distance from home while still avoiding pavement. “It’s like getting on the highway without the cars.” one of us remarked. We would get on the railroad bed, and with only a 3 percent grade up or down, put the bike in the big gear and crank hard and fast until we reached our destination.

No doubt I would rather be riding then picking up trash, but Nancy is hard to say no to. Our riding group had been using the railbed surreptitiously for some time; might not be a bad idea to take care of it a bit. So, when the day for the first cleanup arrived, rainy, dreary, and cold, a handful of us met at the agreed upon spot, and began consolidating debris.

Black bags of garbage, tires, major appliances, toilets, bed springs – the full spectrum of stuff that folks throw out was represented. It was obvious that some items had been resting on the rail bed for decades. “Gee Nancy,” I thought to myself “picking up other people’s trash in the rain is a lot like fun… only different.”

Some folks whose land was adjacent to the trail became indignant towards our meddling: that was their trash, they had dumped it conveniently on the railbed for years, mostly out of sight of their property. The nerve of some people to mess with their trash! We suffered some glares, and returned cheery smiles as we continued our chore.

At some point during the day, Nancy mentioned that there was a national organization called Rail-Trails whose charge was to transform abandoned railroad beds to linear parks. Two abandoned railbeds ran right through the heart of our neighborhood. If our community demonstrated enough continuous support, we may be able to found a local Rail-Trails chapter. I knew we had the railbeds; I was uncertain if our community had the resolve to care for them.

The efforts of a dozen or so of us on that Saturday morning tidied a few hundred feet of railbed that went on for miles and miles. The sheer scale of the project that that Saturday morning implied was daunting. Though I kept the thought to myself, I figured I might attend another cleanup or two before riding would trump trash picking. After all, we could still ride the railbed even if it was littered with debris.

From visiting family in Vermont, Nancy had become acquainted with a functioning Rail-Trail. She had seen how the trail had enriched the community, providing a nice place to walk, run, ride or ski. Some folks could even use the trail to commute rather than using their auto.

Despite my secret uncertainty, things went well. Over the next couple of years, more cleanup days were scheduled. On those days, we met and picked up trash instead of riding. Other folks joined us, rain or shine. Trash and debris were removed from the trail. Our group started to meet indoors. Out of the rain. Sometimes at local restaurants – with food. We discussed our progress, uncertainty turned into plans. Finally NEPA Rail-Trails chapter was formed!

As the group gained momentum, it gained attention, and more people joined, some from quite far away: other riders, hikers, snowmobilers, equestrians, nature lovers, professional people, retired folks, school kids. People contributed money, labor, or time as they could.

Over the next quarter century, grants were applied for. Eventually enough funding became available so that portions of the railbed were re-graded and resurfaced where there had been washouts. Existing bridges, dangerous and terrifying to ride across, were improved and made safer. Gates were installed. Trailheads established. Dignitaries arrived at opening trailhead dedications; ribbons were cut, foot races organized and run.

I still visit the trail regularly. The seasonal events presented by the NEPA Rail-Trail organization afford opportunities to reconnect with neighbors and meet new like-minded friends. Cleanups are still necessaray as the trail is maintained and expanded. Though riding and hiking are always an option, the programs provided by the NEPA Rail-Trail council has expanded my enjoyment of the trail, and understanding of the local environment. A leisurely ride from Forest City to Union Dale while enjoying lunch along the way is a favorite way to enjoy a Summer afternoon.

Snowshoeing and yoga might seem like an unusual combination, and it is. Identifiying trees and other flora and fauna indigenous to our neighborhood seems very natural, and is very fulfilling for adults, and really fun for children. Enjoying art, much of which whose inspiration came from the trail and environs, is particularly stimulating when one can at once see a beautiful scene, and an artist’s interperation of the same view.

Whether the programs are unusual or seemingly typical, they are presented with professionalism, care, and a deep desire to share the beauty of the trail with others. Currently, Lyn Conrad and Deb McNamara are perhaps the most visible faces of the organization at most events. However, they are the first to defer credit for the trail’s success to the efforts of countless volunteers, event participants, sponsors, and community leaders.

Maybe picking up trash in the rain is character building; maybe not, yet it’s hard to say why those early years, when we actually spent more time re-claiming the trail then using it, evoke such fond memories. Maybe it was the camaradarie of joining together with neighbors in what seemed at the time, an insurmountable task. Or, seeing a beautiful green corridor emerge from under tons of trash and debris. Or maybe seeing first hand how a small group on a rainy Saturday grew into a community of caring individuals whose efforts have created a place for so many to experience, in so many ways, the joy of nature. 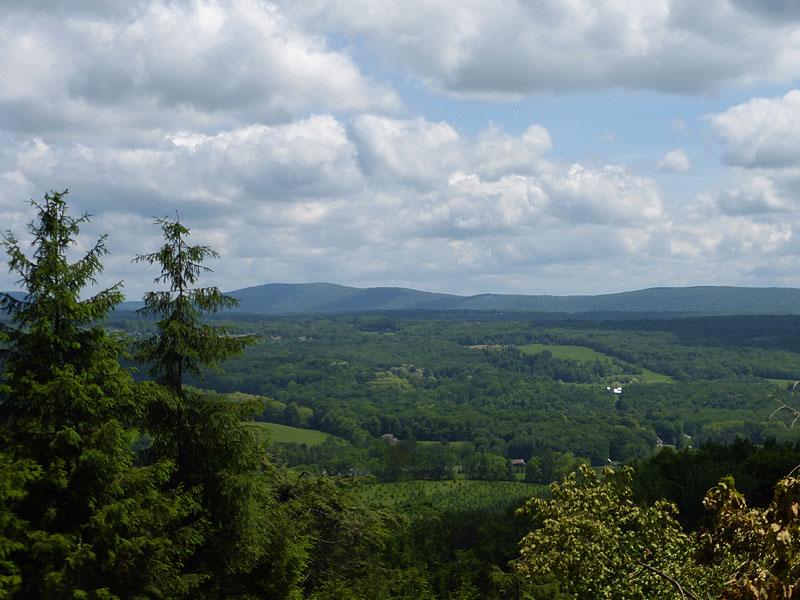 With recent temperatures that nudged the 90 degree mark, it’s easy to think that Summer is here.

This morning, while letting dog out a little after sunrise, a glance at the thermometer showed a reading of just over 40 degrees.  This served as a reminder that Summer won’t officially arrive for another ten days or so.

A few years back, there was a “Summer” that never really ever got going; I recalled not having to wear fleece for several days in early August that year.

Weather on this mountain in Pennsylvania has a mind of it’s own. Last Winter barely lived up to it’s name. Maybe only wishful thinking, but it feels like this Spring will give way to a sultry Summer.

Yup, there ya have it, a bleeding heart liberal flower. In interest of equality, I had searched for an equally conservative representative from the flora world, but none came to mind.

There is a danger in labelling objects and people: once labeled, our curiosity in an object tends to diminish.  Once labeled a “liberal” one may tend to overlook that the flower is also pink and beautiful.

Particularly in these times of comparison, contrast, and debate of candidate’s values, it is good to try to remain observant and curious rather than overconfident and judgemental. 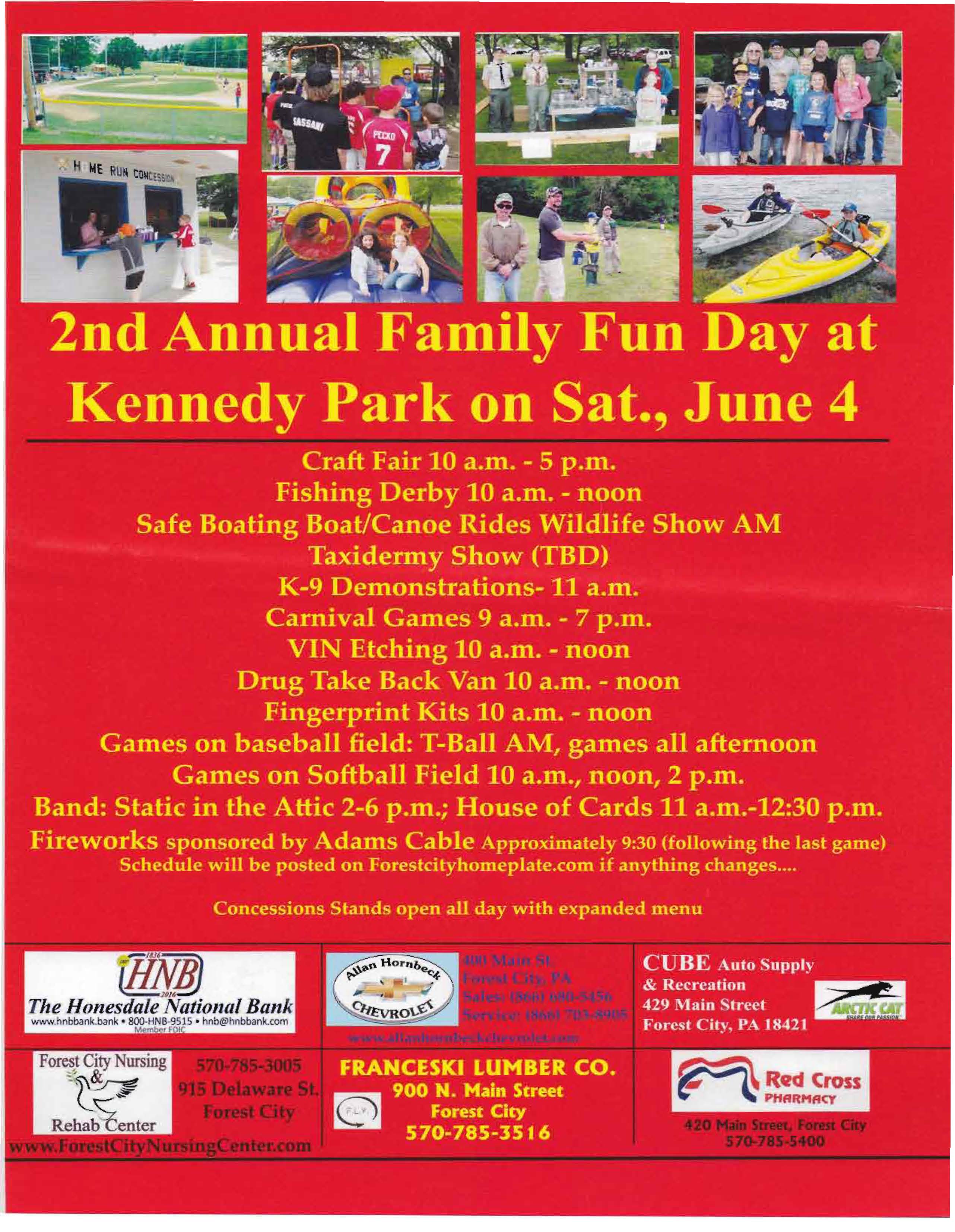