The sale will run through Wednesday,

The cost is $2.50 each for either Homemade Peanut Butter or Coconut Cream Eggs.  The eggs will be available for pick up on both March 21st and March 28th at the Clifford United Methodist Church.

The fundraiser will help the youth be able to attend youth gatherings throughout the entire year.  Pre-orders are appreciated.  To place an order, please call Robin Correll at 222-4344 or Lisa Barhite 222-5493.  Thanks for your support! 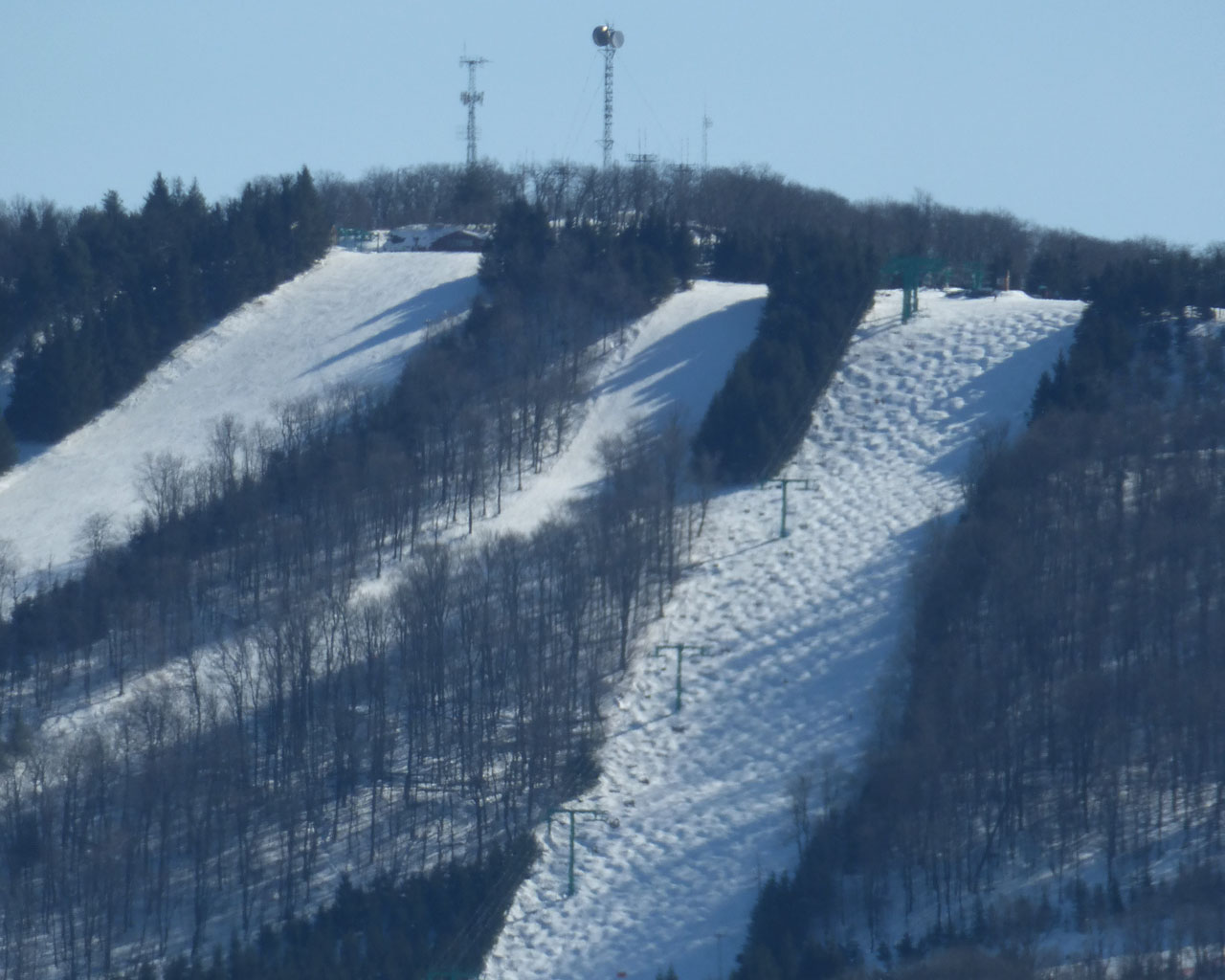 The turns skiers and riders have enjoyed through the snow left from multiple March storms on the Tunkhannock have nurtured a spring mogul field, much to their delight!

CLIFFORD TOWNSHIP PA — “Our sincerest THANK YOU to EVERYONE who supported our most successful fundraiser ever,” said Sandy Wilmot, Director of the Clifford Township Historical Society (CTHS).  On Sunday September 10th, amid a crowd of visitors enjoying an early Fall afternoon, Wilmot drew the winning tickets in the 50/50 raffle held by the CTHS.  (The winners’ names are posted on their website, www.cliffordtownshiphistoricalsociety.org.)

“Donations were collected right up to the end, just prior to drawing the tickets,” Wilmot added.  “And the most amazing part is that $2,750 from several winning tickets has been graciously donated back to the Historical Society.  This support is so very much appreciated and will be put to good use!”

Held inside the nearly 150-year old Yarns Cider Mill at Suraci Farm in Clifford Township, the raffle drawing was the culmination of an innovative ten-month long major fundraiser.  With hundreds of tickets sold at $50 apiece, “raising funds like this wasn’t an easy job, but our community of friends and families came through for us,” said Wilmot.  “It’s exciting to know that our small group of volunteers can continue to move forward with many of our plans and programs to help keep local-area history alive.”

Founded in 2006, the CTHS has endeavored to collect, document, and preserve the wealth of historical information and memorabilia relating to the early settlement of Clifford and the surrounding area.  Throughout the years, the CTHS has established the Museum of Local History and its ever-growing indoor exhibits.  It restored and enhanced the Hoover School, is continually collecting artifacts for the year-old Agricultural Museum located on the picnic grounds of the township’s fire company, seasonally grows the efforts of the newer Children’s Garden, and is currently in the throes of renovating the Cider Mill to working order.

“The community continues to give and help and support our program’s efforts,” Wilmot said.  “And these raffle funds have really helped us to continue matching the various grants made available to us through The Endless Mountain Heritage Region.  Funded by the PA Department of Conservation and Natural Resources, they made $12,000 available to us for this year and next.  Together with the funds raised through this raffle, prior grants, monetary donations, and the countless hours our handful of volunteers continually donates, we’re able to match grants dollar for dollar.”

To volunteer your time with the CTHS or make a donation to help fund its many projects, contact the group at 570-679-2723 or email peltz@nep.net. 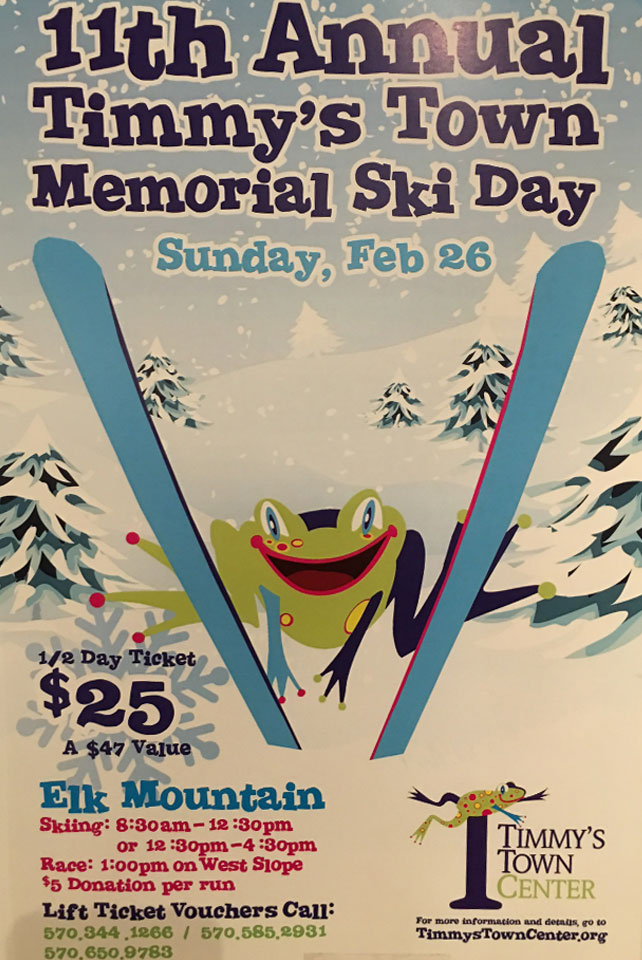 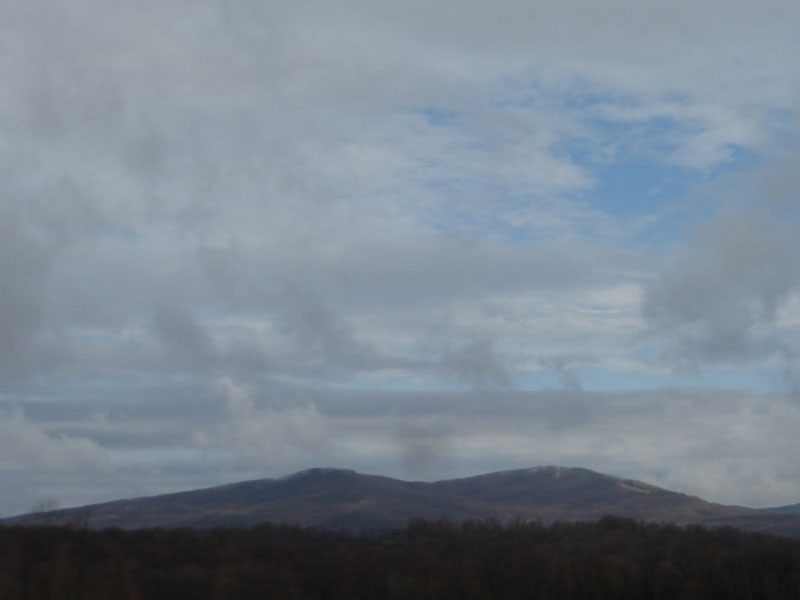 Weather has been becoming seasonable again, though, it feels colder than it should in the mornings.

Optimism for the weekend, as temps near 70 are forecasted! 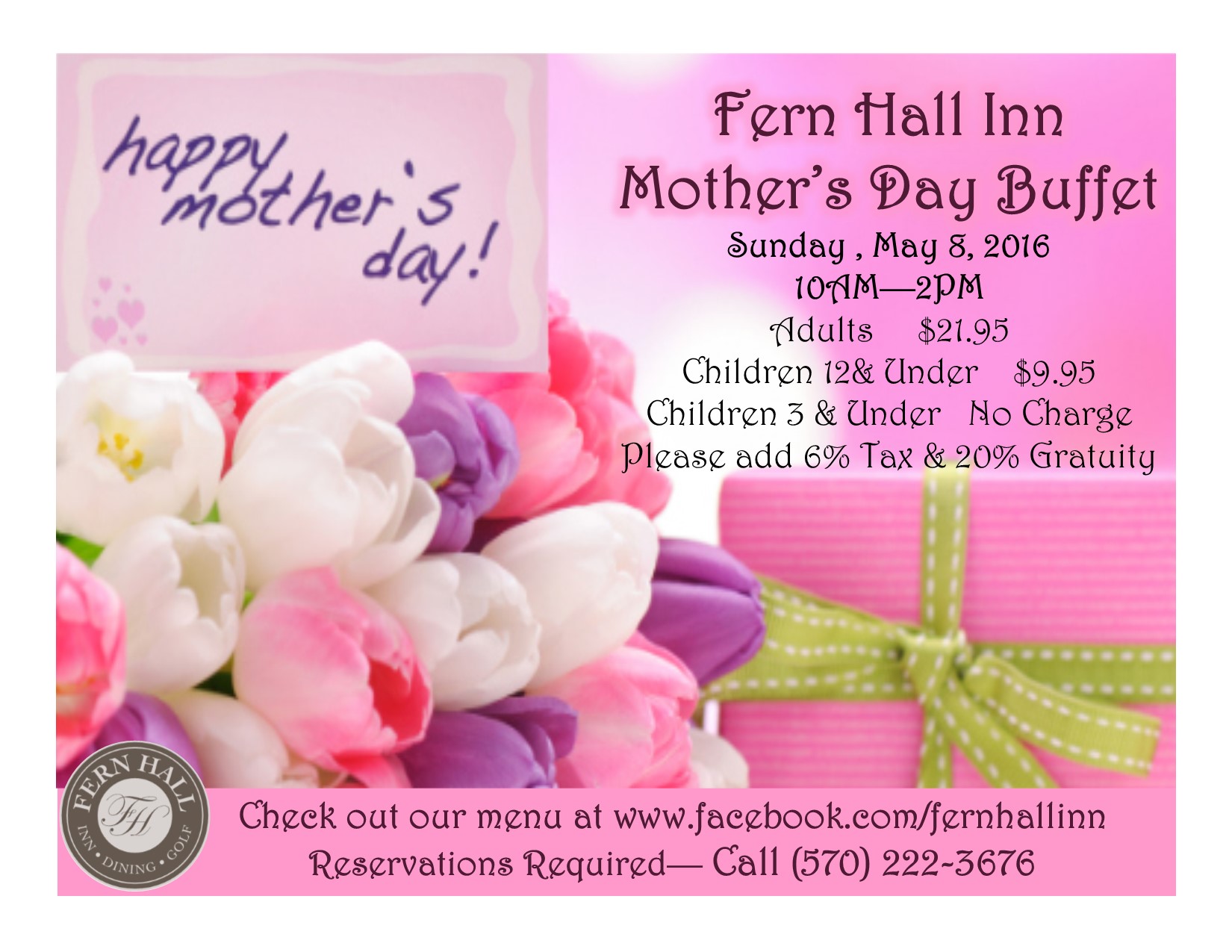 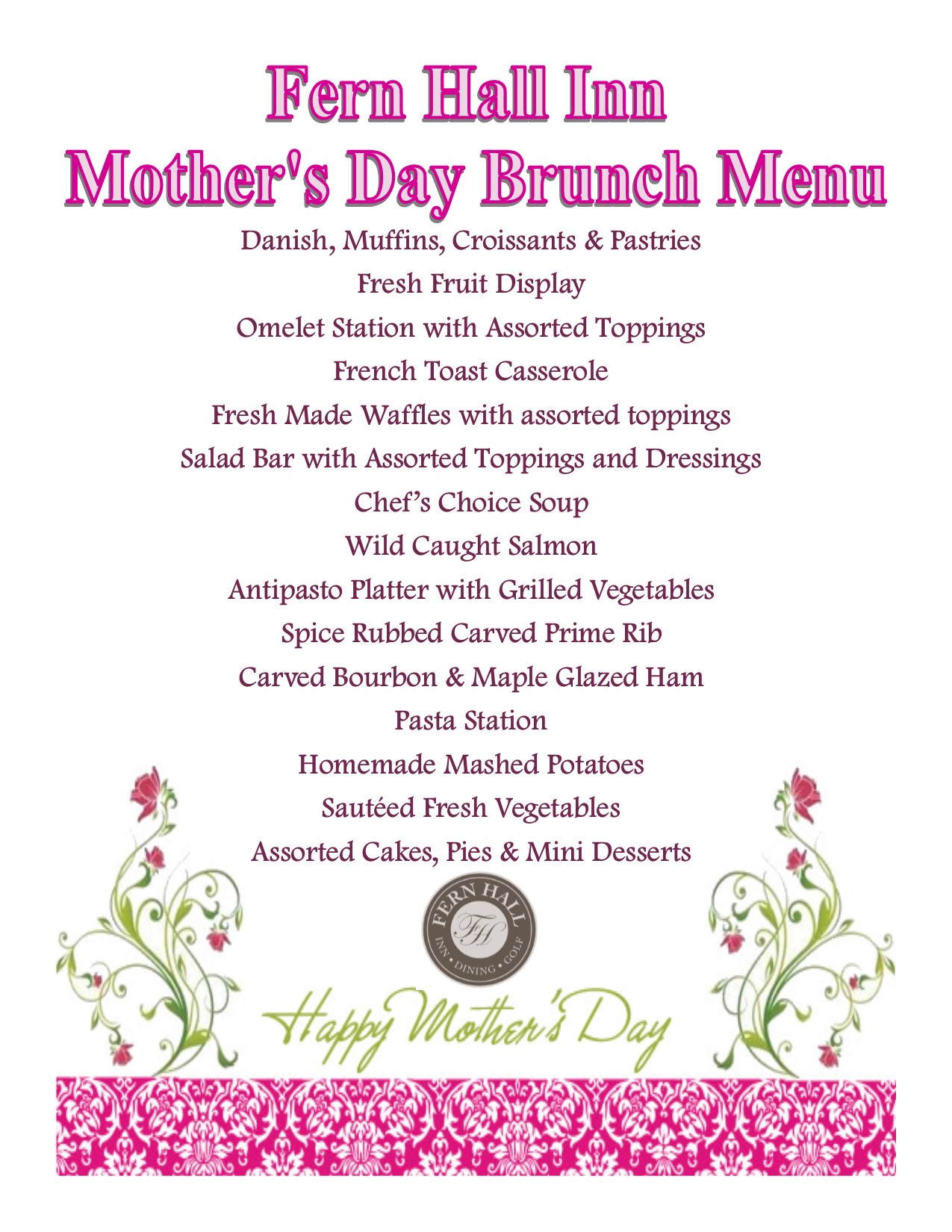 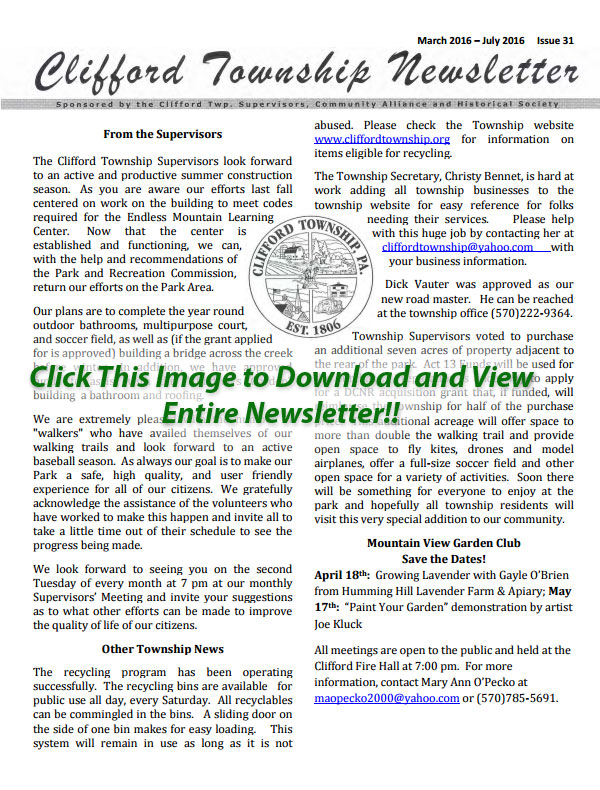 CLIFFORD TOWNSHIP PA — Come one – Come all! The grand opening of the new General Store in the Clifford Museum of Local History has been scheduled for Sunday February 21st, 1:00pm-4:00pm.

As part of the Clifford Township Historical Society’s (CTHS) continually evolving efforts to preserve and display local history, the General Store is the group’s latest project to come to fruition. “We’re really so excited about this,” said Sandy Wilmot, President of the Clifford Township Historical Society. “The Museum of Local History has kept growing since it first opened in 2012, and the General Store has been a planned part of this all along. For years, we’ve been collecting all kinds of memorabilia and local historical artifacts to display in the store, and to have this project finished is great.”

Located in the Community Center on Cemetery Street, Clifford, the Museum of Local History comprises an ever-growing assemblage of all things related to the history and the people of the local area. The General Store has been designed and built within the museum itself.

“Our store was designed to be just like some of the old general stores that were once found throughout the Clifford area,” said Wilmot. “It’s comprised of two separate walk-in rooms and includes memorabilia as well as items for sale.

In the main room, CTHS has displayed numerous artifacts, many of which have been donated from friends throughout the community. “There’s a pot-bellied stove, a big old barrel where folks can play checkers, and on loan to us from the Kenny Bennett family of Harford is the original McCaskey cash register from Bennett’s Store,” said Wilmot. “The shelves are stocked with jams, jellies, and apple butter that society members make from local area fruits and sell to benefit our many projects. We’re also selling CTHS calendars, CDs and books about the area’s history, note cards and Christmas ornaments, mugs and more.”

The room off the store’s main area is a replica of an old doctor’s office. As Wilmot noted, “Around the turn of the century, the doctor was also the town barber. This room houses an antique tilting barber’s chair that’s on loan to us from Sarah Keating. We’ve also collected numerous old medical books, vintage jars and bandage tins, and many somewhat unusual items that you wouldn’t necessarily find in a doctor’s office of today — so many things have changed through the years. Being able to share some of these items from long ago is not only educational, but it’s a wonderful way for many of our donors to be able to pass along some of their own heritage.”

While the General Store has been designed to be as authentic as possible, perhaps one of the more interesting aspects of the store is its construction. The cedar boards that side the exterior walls were collected from the former Paradise Valley Dance Hall owned by Harvey White. “The hall is now being remodeled by Mike and Dave Prestys,” Wilmot added, “and they were more than happy to donate enough siding for our project. CTHS volunteer, contractor Jerry Lewandowski, carefully removed the siding and installed on the exterior of our General Store. It really looks great and adds so much authenticity.”

The CTHS continually benefits from local area residents and its dedicated volunteers who share their time, countless talents and skills, as well as their own ancestral memorabilia to help further the group’s works and enhance the community’s education of area history. Anyone who has any historical items that they would like to donate to or lend to the museum is invited to contact them at 570-679-2723 or www.cliffordtownshiphistoricalsociety.org. The museum is open monthly on the third Sunday from 1:00pm-4:00pm.

CTHS volunteers Shirley Granger, Sandy Wilmot, and Marianne Pribula take a break while putting the finishing touches on the new General Store in the Museum of Local History, located in Clifford’s Community Center. The new exhibit will open to the public on Sunday February 21st, from 1:00pm-4:00pm. 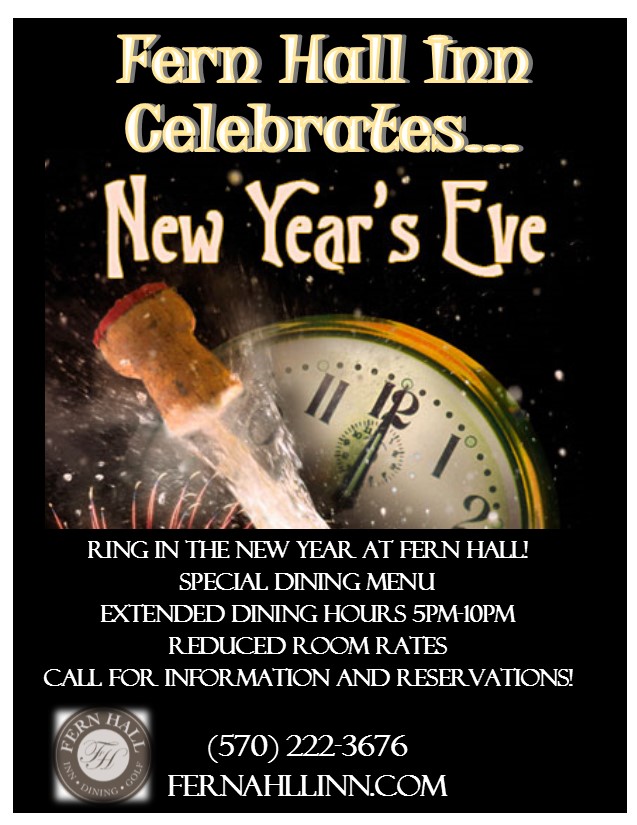 Brandon Freely, Mt View senior assembled the twenty minute loop
with support from the Clifford Township Supervisors.
All are welcome to enjoy – free of charge.
A sample of the Light show is also on Cliffordpa Facebook page.
Enjoy the Season !!!
More info- Contact Twp secretary 570-222-9364 or email cliffordtownship@yahoo.com