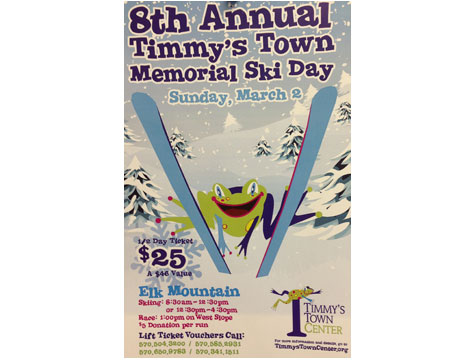 As with any community, people are born, marry, mate, and die. The Elk Mountain community is no different, except that a lot of skiing gets done between those milestones of life.

Some of us have been going up and down that hill for half a century. Others have been called from this existence much later; some much sooner.

It is incumbent upon those of us still making the trip up and down the hill to remember and honor those friends and family members who are no longer able to share this joyous routine.

This Sunday, make some runs down the race course on the West Slope – Ted Ligety is not the only champion to ski Elk – there’s a bit of champion in all of us!

Come on out, support a great cause, and honor those of us who have gone before us.
Elk Mountain Memorial Race Benefiting Timmy’y Town Center. Sunday 3/2/14 at Elk Mountain.
1/2 day lift tickets good either 8:30 – 12:30 or 12:30 – 4:30 $25 each.
Race at 1:00 PM on the West Slope. $5 per run.
All proceeds benefit Timmy’s Town Center an interactive children’s museum in Scranton Pa, founded in memory of a little boy who died from cancer. 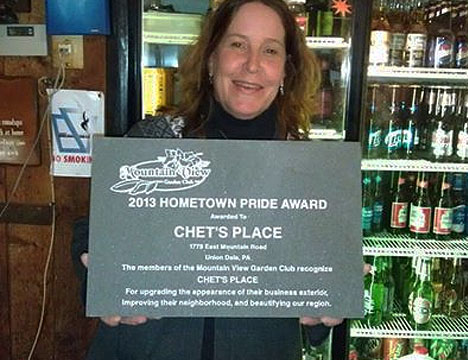 Congratulations to Jean Shinn and Mark Silfee of Chet’s Place on the recent “Hometown Pride Award” presented by the Mountain View Garden Club.

If you’ve never seen Jean’s handiwork at it’s best, plan now to come and visit Chet’s Place in late June or early July, when the Summer is at it’s height. The flowers around Chet’s Place bar, the lodge, and Jean and Mark’s home are absolutely spectacular! One wonders how Jean get’s all this done, cooks for Chet’s Place patrons, and still has time to keep the Chet’s Place softball field in perfect condition!

Since forming in 2005, the Mountain View Garden Club members have been busy fulfilling its mission to share their knowledge and love of gardening while beautifying the Elk Mountain area and surrounding communities.

The Mountain View Garden Club accepts nominations recognizing businesses or organizations for upgrading the appearance of their business establishment’s exterior, improving the appearance of their neighborhoods, and beautifying the region. Also eligible for the award are organizations hosting projects/festivals that enhance the area’s quality of life.

While winter’s chilly temperatures and continuous snowfalls still have a grip on the mountain and area communities, you may not be thinking about gardening and outdoor projects! Actually it’s the perfect time to browse seed catalogues, leaf through gardening books and draft a spring planting plan. The payoff can be huge –beautiful blossoms, delightful scents, a peaceful and serene spot to enjoy the morning dew or evening sunset. You too, can beautify the community! 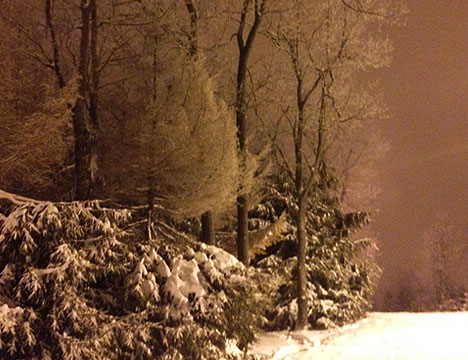 The very top of the Slalom trail, shown here at night, is docile and nearly flat. Beautiful in the evening light; one can sometimes see deer and fox tracks weaving in and out of conifers and hardwoods that line the trail.

Once over the top of the headwall the character of this slope changes dramatically; the Slalom opens to a wide expanse dropping several hundred feet at a steep, consistent pitch making it one of the best slalom ski racing trails on the East coast.

Many, many years ago, half of the Slalom was left as a glade – just enough trees were removed so one could turn, or “slalom” around the remaining hardwoods adding considerably to the challenge already posed by the trail’s breathtaking incline.

Over the years, the trees were removed, and the fall line adjusted to provide the wonderfully consistent pitch enjoyed today.

“Uhh… I dunno 60, maybe 65.” Replied a coach when asked by a young racer to estimate how fast he was going as he passed by. The trail has always been steep enough to allow considerable velocity – care must always be taken regardless of one’s ability level.

Inappropriate for beginner skiers, the Slalom trail has been skied by some of the best skiers in the country; young racers who learned to race on this hill have gone on to ski for and coach the US Ski Team, and to successful pro ski racing careers.

Eight years ago, just after the Torino Olympics, members of the US Ski Team, including current Olympians Hannah Kearney who captured a bronze medal in Freestyle Skiing Ladies Moguls earlier this week in Sochi, and Ted Ligety, pictured below, who won a gold medal in Torino, raced on the Slalom Trail along with junior racers from all over.

When not racing, the Olympians skied with aspiring local racers, giving them ski and racing tips, as well as the thrill of a lifetime: skiing with the best skiers in the world on their home mountain.

This Wanderlist was handcrafted at 2660 feet, from where Pro2 sends warm regards to all his friends and colleagues. 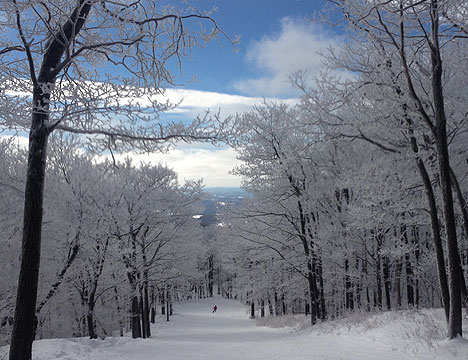 The recent storm provided enough snowfall for the Lehigh Trail on Elk Mountain to be opened. This trail, the longest of all, is beyond the reach of snowmaking facilities. It winds leisurely around the North Knob’s shoulder, offering spectacular views of the South Knob, and beyond.

Many years ago, before being re-routed, the Lehigh actually went uphill for a bit on it’s way to rejoining the Delaware trail further down the mountain.

Several very large rocks are precariously perched on either side of the trail. A close examination reveals parallel grooves in these rocks; seemingly the result of glaciers dragging debris as they extended and retreated during the last ice age.

The truth about these rocks is much more compelling. They are sedimentary rocks, having been created by sand and earth deposited at the bottom of an ancient delta. As the course of the delta shifted, debris settled in one direction, another, and another, layer upon layer. The sediment eventually hardened into rock. The changes of the water’s direction countless years ago is recorded in these rocks and is evident today.

As geological forces shaped the continents, the floor of the delta was thrusted upward, creating what was once one of the tallest mountains on Earth.

Hard evidence of such drastic change casts a different perspective on the hill that brings us such joy. Now, a modestly tall mountain, Elk was once was once lower than sea level; it was also part of a range higher than the Himalayas are today.
This Wanderlist was handcrafted at 1620 feet.