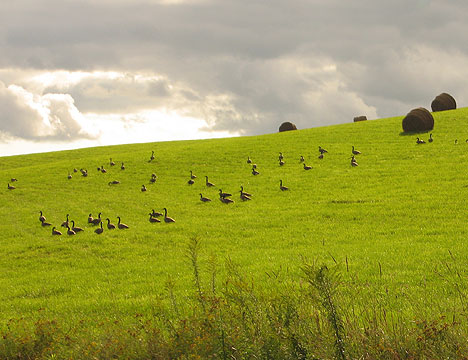 In one field, one can see hay bales, evidence of work completed, and geese resting en route to their winter homes; a scene of work in progress.

Geese, whose only work seems to be to fly north or south dependant on the season, often frequent this meadow throughout the summer,
though they generally take to the small pond across the road in small families. Early in the summer, goslings follow their parents around this small pond, eating, growing and strengthening, preparing for their first migration.

This time of year, however, the field hosts large gaggles, probably not locals; visitors on their way to their southern home.

This weekend, along with Memorial Day, are the holiday bookends of the Summer season. It will be hard to wander around The Hill for
the next few days without running into great food, music, and festivities.

And if you feel the need, enjoy the La Festa Italiana Scranton – more food, more music, and more festivities, before retiring to the
bucolic quiescence of The Hill. 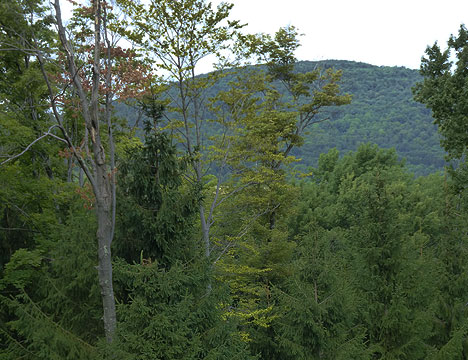 It seemed like Summer would never end, but on a recent hike up Elk, with careful attention one could see that the most subtle of the
first pale golds and reds of Autumn have emerged amongst the vibrant greens of Summer; harbingers of the change of seasons.

“The more things change, the more they are the same”. “The only constant is change”.

Observing change does seem to bring out the philosopher in folks. Some believe that absolutely nothing is static – everything is
always changing. People are either growing up or growing old; seasons are either coming or going; the moon is either waxing or waning.

On the annual solstices, after steadily progressing across the horizon for months, there is a moment when the days are no longer
lengthening or shortening. The earth reaches the extent of it’s tilt and the sun appears to stand still, even if just for
an instant.

It often seems that many of us succumb to the illusion of stillness as we go through life. We see things as concrete, immutable,
the same today as they were yesterday, and so, logically, they must be the same tomorrow.

If one abandons oneself and embraces constant change, the world takes on a very different character, one ripe with previously
unrecognized possibilities.

To comfort her child, a mother told her son, what her mother had told her: “Things change. If times are difficult, have faith,
things will get easier. If you are having a great time, live it up, because, well, things will change to when times are not so good…”

The son took these words to heart, and, while pondering, applied logic to this wisdom, and found that when one is
having a good time, things will change; however, not necessarily to the bad.

It is logical, and possible, and with mindfulness, probable, that things may get even better than one could have possibly imagined. 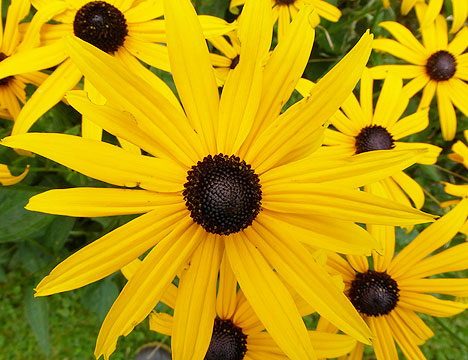 Wikipedia reports: “Rudbeckia hirta, commonly called black-eyed Susan, is a species of flowering plant in the family Asteraceae, native to the

Eastern and Central United States. It is one of a number of plants with the common name black-eyed Susan. Other common names
for this plant include: brown-eyed Susan, brown Betty, gloriosa daisy, golden Jerusalem, Poorland daisy, yellow daisy, and
yellow ox-eye daisy.

The plant also is a traditional Native American medicinal herb in several tribal nations; believed in those cultures to be a remedy,
among other things, for colds, flu, infection, swelling and (topically, by poultice) for snake bite (although not all parts of the
plant are edible).” 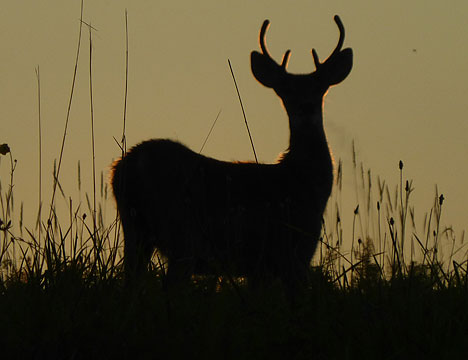 Silhouetted at the meadow crest near sunset, this fellow returned my gaze for quite some time, though with very little interest.

As his antlers have only 2 points to a side, he’ll not be considered fair game this deer season, and will be left to develop his rack
for at least one more year. Soon, he’ll rub against trees and scrape the soft velvet from his antlers, backlit here by the fading sun,
leaving them white and bony.

Maybe it was the sultry evening weather, or perhaps the time of year, but this young buck, along with his harem, maintained a
demeanor of calm disinterest despite my presence.

The rut and colder weather, harbinger of hunting season, along with the necessity of foraging beneath snow, is not far off.

But today, this evening, there is nothing to worry about, nothing to do, but nibble the best grass of the season, amongst
family and loved ones, and swim in the soothing twilight of August. 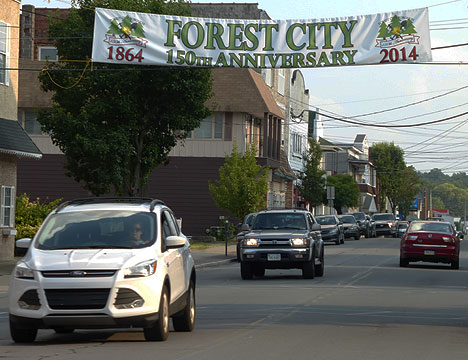 Forest City, also known as a “mile of hospitality”.

Tonight and tomorrow is the perfect time to come out and explore Forest City during it’s 150th anniversary celebration.

From local sculpture, art, and literary events to pierogi eating contests – there’s something for everyone!

Check the Wanderlist for events, and click the link below for a printable schedule of events to take with you while
wandering about this wonderful town!